My Experience Practicing Iyengar Yoga in Arambol with Alpesh

My Experience Practicing Iyengar Yoga in Arambol with Alpesh 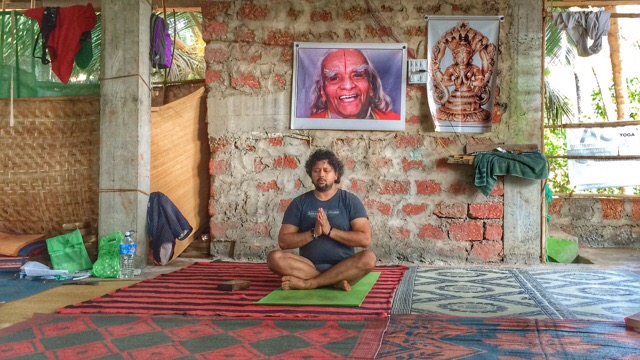 From Mysore to Arambol

I left Mysore the second week of January. I took a night bus to Arambol, Goa but the next morning I felt sick in the bus and I still had like four hours to go. I had no choice but to get off the bus by Patnem Beach.

After a few days in beautiful Patnem Beach I decided to continue my way up north to Arambol where my friend Nina, who I had previously met in Mysore, had a room waiting for me in a nice shared house. I met there two new fantastic friends. Actually one of them I had already met before.

When I entered the house I found this guy laying down in the floor in shavasana, the relaxation pose. It was Gianni! A nice Italian dude that I had met at the http://nandncomputers.blogspot.com /2016/01/the-sivananda-ashram-in-madurai-most-visit-ashram-india.html" target="_blank">Sivananda Ashram in Madurai just a couple of months before. I didn't know we had a mutual friend and I didn't expect to meet him again, specially not in that way. That was a really nice surprise.


Anyway, back to my story.

Looking for a yoga teacher in Arambol

As soon as I arrived in Arambol Nina said "lets go for yoga." She had been in Arambol for a while so she had heard about a few teachers but she had not yet practiced with any of them. She wanted to try Iyengar Yoga with one of the local teachers.

I had never practiced Iyengar Yoga before and after three months practicing Ashtanga Yoga in Mysore, while injured, this was a very welcome change of scene and practice for me. The Iyengar Yoga style is known for been a restorative practice. It focuses on proper alignment of each posture with the support of props, and on the proper activation of all necessary muscles to hold the postures for a long time.

Before deciding where to practice we paid a visit to Alpesh's yoga school and to the Himalayan Iyengar Yoga Centre. Our first impression with Alpesh was not that positive. He was just sitting on the floor and he seemed not to care much. On top of that one of Nina's friend had said that although his class was good he didn't like him because he had a bad temper and was not very kind with his students.

My experience practicing Iyengar Yoga in Arambol with Alpesh

Well, somehow we still decided to practice yoga with Alpesh. He offers a package of six classes for 2,000 rupees but we were not sure if we were going to like the class that much to stay for a whole week so we asked him if we could just pay for one class and the next day decide if we wanted to pay for a week. He immediately agreed with no problem at all.

By the end of the second day we were both hooked. We were really enjoying his class and we started to like him every day even more. Everyday after class we would talk about how much we were enjoying his class and his very distinctive, "Oooopen the chest." The days passed quickly. Soon a day became a week, a week became two and all of a sudden we realised we had already been practicing with him for four weeks!

Alpesh's yoga class can be quite challenging. I think in average we would hold difficult poses for more than thirty breaths. Many times I felt that I couldn't hold the postures any longer, but as soon as he would see you coming out of the pose before his instruction he would say, "What happened? Why are you tired? Stay! Be Strong! Come back!"

Yes, he likes to be tough with his students, specially with the new students. Sometimes you can notice some students getting affected by his attitude. He likes to demand the best from everyone, and that's because he follows the teachings of his gurus.

A couple of times during his class he told us that his teachers say that the role of the teacher is to brake the ego of their students. A very different approach to most yoga classes in the west. Luckily he was always very kind with me, I guess because of my hamstring injury, so instead he decided to pick up on Nina, from day one. "Nina! What happen? Why are you tired?" Lol.

I've not practice yoga with Usha Devi in Rishikesh yet, Alpesh's teacher, but I've heard how seriously tough she can be, and although Alpesh can be a bit tough and demanding I think he is not as tough as Usha, not at all. He is still very kind and warm and has a very honest concern for his students. He is also humble, authentic and he has a very good sense of humour. 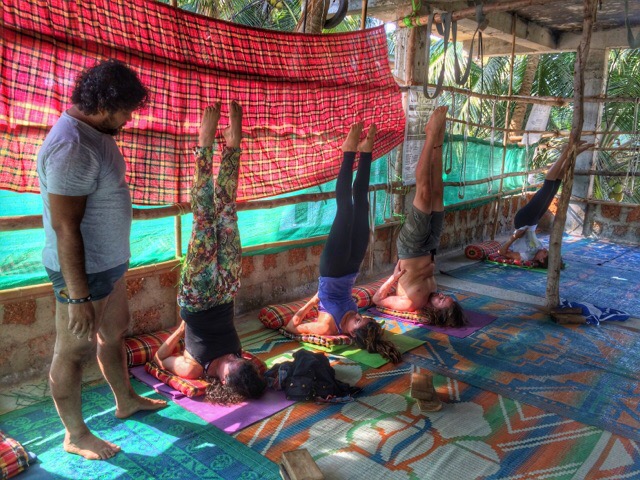 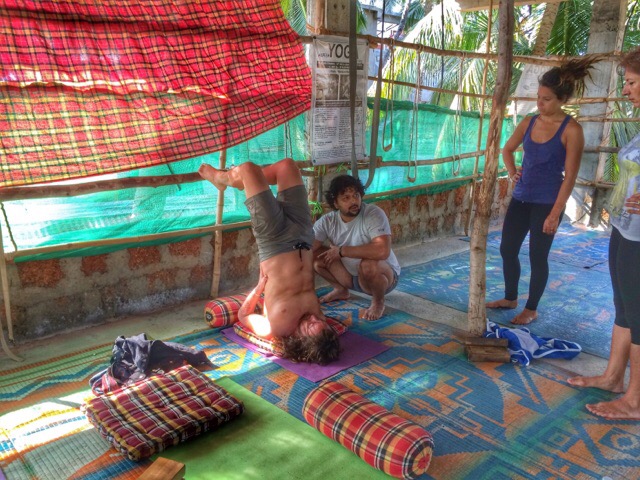 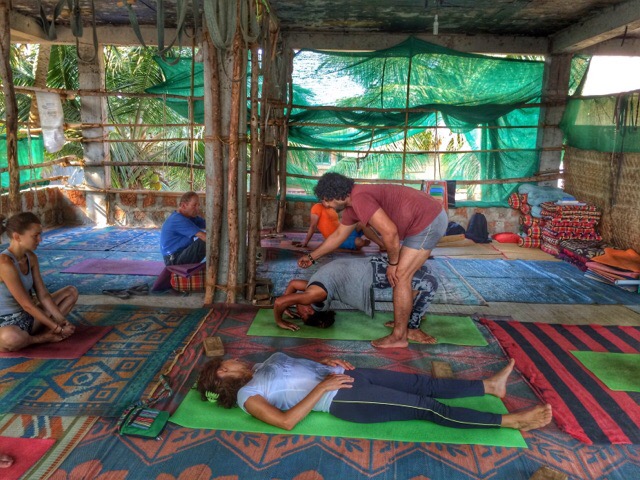 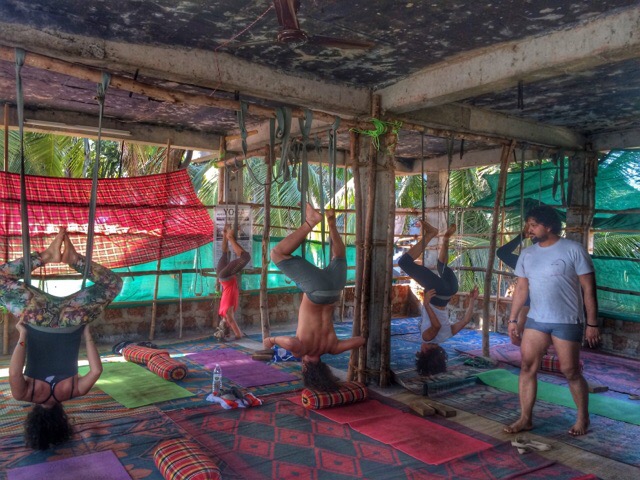 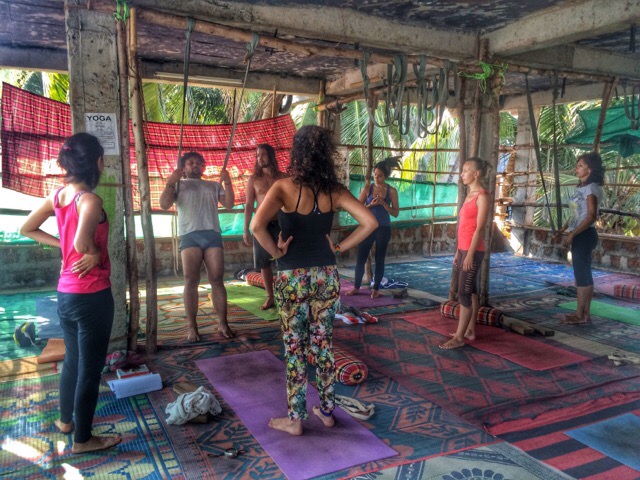 How to get in touch with Alpesh

Although the Iyengar Yoga style is not a style that I would like to practice regularly I still enjoyed a lot practicing yoga with Alpesh. My regular yoga practice and my teaching style has definitely being influenced, in a positive way, by the many things that I learned in his class.

So if you are visiting Arambol don't hesitate to visit Alpesh and practice Iyengar Yoga with him for at least a week. Please give him a warm hug on my behalf. You can get in touch with him through his website alpeshyoga.com

Many yoga teachers of different levels of experience come to practice yoga with Alpesh. He likes to ask them to teach (as volunteers) the beginners yoga class at 10 am, in whatever style they teach. And that's exactly what I did. It was nice to have the opportunity to teach a few yoga classes in his yoga school just before leaving Arambol. 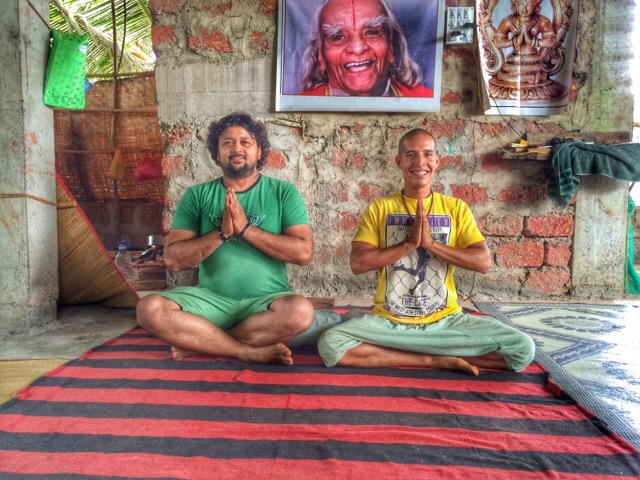 Related : My Experience Practicing Iyengar Yoga in Arambol with Alpesh